Agricultural citizen science turns the research paradigm on its head:

The power of the many – innovating agricultural technologies together.

Instead of a few researchers carrying out complicated field trials, large numbers of farmers or gardeners carry out simple and small trials on their land.

Taken together, the many small trials can offer valuable information about the local suitability of agricultural technologies.

Tricot stands for ‘triadic comparison of technology options’. The basic idea is that you want to innovate an agricultural technology together with growers. This is done by comparing multiple technology options in sub-sets of just three, in ‘triads’.

Decentralized field data from many growers are merged and analyzed in the ClimMob software.

For example, you might want to find a bean variety that is adapted to a certain region and climate. Or you’re looking for the fertilizer regime that produces best results. Now, instead of testing all new bean varieties in a large field trial, different sub-sets of just three bean varieties are assessed at many experimental sites.

This data collection is done by the participating farmers and gardeners (‘growers’) on their own plots or farms. The data from all these growers get merged and analyzed in the ClimMob software. 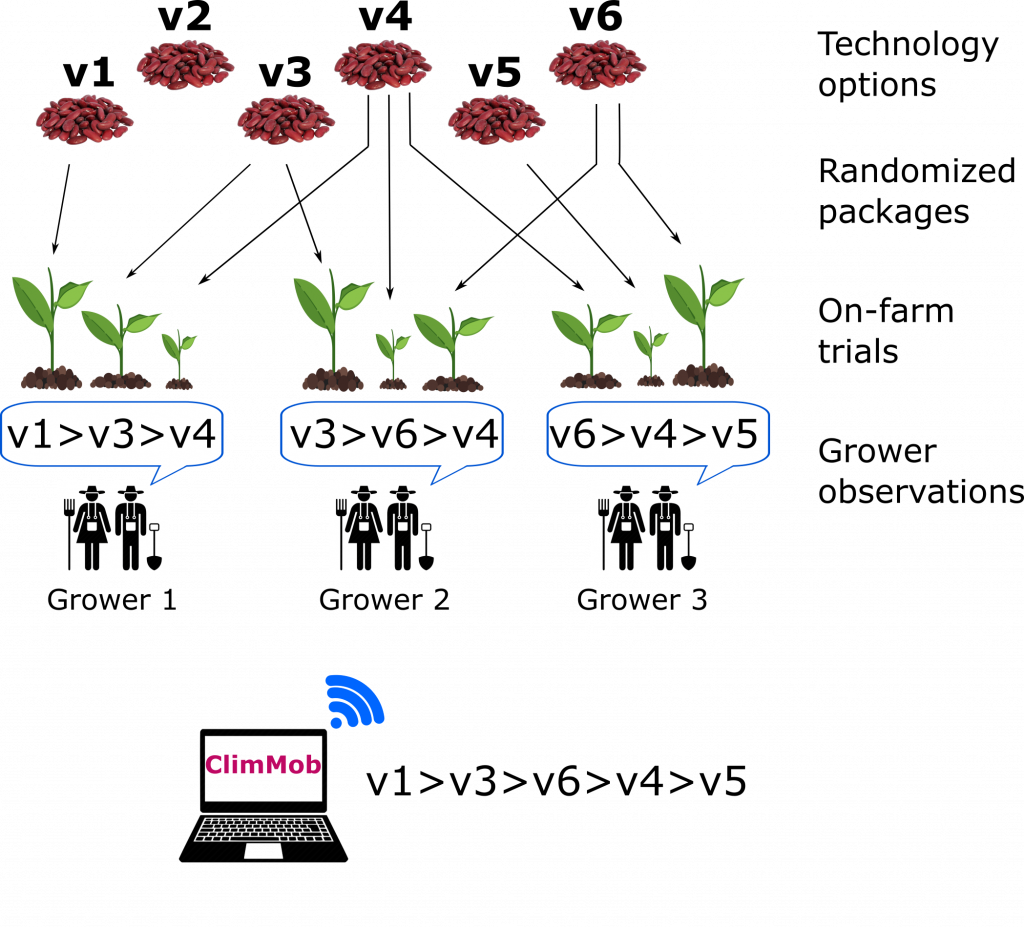 What is special about tricot?

Many growers contribute to a tricot experiment through small on-farm trials, testing the technology options under real farm conditions. All these small trials taken together give plenty of data to allow for robust analyses – offering more information than could be gathered if the experiment was run at a single research station. Crowdsourcing uses the knowledge of the many!

For participating growers, it is simple to carry out a tricot trial on their farm: They do not need to take exact measurements in their trial, as tricot uses comparison data. Each farmer cultivates three technology options – for example, three different bean varieties, or three different fertilizer regimes – and ranks them: Which of the three worked best, and which of the three performed worst? Growers can observe a number of different criteria, such as vegetative growth, yield, or produce quality.

How does tricot work?

The implementer of the tricot project decides which technology to innovate. In the example of finding the best adapted bean variety, the technology would be: bean variety. The technology options are the pool of different bean varieties you want to test (variety 1, variety 2, variety 3, etc.).

First, you design your tricot project with a few clicks using the ClimMob online software. ClimMob was specifically developed to design and manage tricot projects. With ClimMob, you assign a specific set of three bean varieties to each grower, out of the total pool of, let’s say, 20 varieties. This is done by a systematic random sampling. ClimMob takes care of all the statistics in your tricot project.

Next, you engage field agents They help you to set up trials in different places at similar times and train the participating growers (farmers and gardeners). Each field agent might engage with 10 to 20 growers. In the example of testing new bean varieties, the field agents would supply the growers with the packages containing three bean varieties each. It’s important to know that each grower receives three different bean varieties, in an incomplete block.

Now the growers are all set to participate in the experiment. On small plots on their land – just about a few square meters –, they will grow the three different bean varieties they were given alongside their other crops. The trial must be treated exactly as they usually treat their crops.

During the growing season, growers write down observations about the technology options they are testing on easy-to-use observation cards. After harvest, the field agents call or visit the growers and collect all the observation data using the free and easy-to-use smartphone app ODKCollect. The data are uploaded to the ClimMob software, where they are analyzed in aggregate.

Plan and design your tricot experiment with ClimMob version 3 [https://climmob.net/climmob3/]. This is the newest version of ClimMob. It is free to use.

For collecting data on mobile devices, field agents will use the free ‘ODK Collect’ app. You can grab it from the [Google Application Store].

ClimMob version 2 is outdated. Please only use if you have already started your experiment using this version. You can access it for free at [http://climmob.net/Version_2/]. Version 2 uses a custom Android App for collecting data. You can grab it from the [Google Application Store].

The development of ClimMob was supported by many donors over several years.